The Expression of Dopamine Receptors Gene and their Potential Role in Targeting Breast Cancer Cells with Selective Agonist and Antagonist Drugs. Could it be the Novel Insight to Therapy?


Background: Breast cancer is one of the common causes of mortality for women in Iran and other parts of the world. The substantial increasing rate of breast cancer in both developed and developing countries warns the scientists to provide more preventive steps and therapeutic measures. This study is conducted to investigate the impact of neurotransmitters (e.g., Dopamine) through their receptors and the importance of cancers via damaging immune system. It also evaluates dopamine receptors gene expression in the women with breast cancer at stages II or III and dopamine receptor D2 (DRD2) related agonist and antagonist drug effects on human breast cancer cells, including MCF-7 and SKBR-3.

Methods: The patients were categorized into two groups: 30 native patients who were diagnosed with breast cancer at stages II and III, with the mean age of 44.6 years and they were reported to have the experience of a chronic stress or unpleasant life event. The second group included 30 individuals with the mean age of 39 years as the control group. In order to determine the RNA concentration in all samples, the RNA samples were extracted and cDNA was synthesized. The MCF-7 cells and SKBR-3 cells were treated with dopamine receptors agonists and antagonists. The MTT test was conducted to identify oxidative and reductive enzymes and to specify appropriate dosage at four concentrations of dopamine and Cabergoline on MCF-7 and SKBR-3 cells. Immunofluorescence staining was done by the use of a mixed dye containing acridine orange and ethidiume bromide on account of differentiating between apoptotic and necrotic cells. Flow cytometry assay was an applied method to differentiate necrotic from apoptotic cells.

Results: Sixty seven and thirty three percent of the patients were related to stages II and III, respectively. About sixty three percent of the patients expressed ER, while fifty seven percent expressed PR. Thirty seven percent of the patients were identified as HER-2 positive. All types of D2-receptors were expressed in PBMC of patients with breast cancer and healthy individuals. The expression of the whole dopamine receptor subtypes (DRD2-DRD4) was carried out on MCF-7 cell line. The results of RT-PCR confirmed the expression of DRD2 on SKBR-3 cells, whereas the other types of D2- receptors did not have an expression. The remarkable differences in gene expression rates between patients and healthy individuals were revealed in the result of the Real-time PCR analysis. The over expression in DRD2 and DRD4 genes of PBMCs was observed in the patients with breast cancer at stages II and III. The great amount of apoptosis and necrosis occurred after the treatment of MCF-7 cells by Cabergoline from 25 to 100 µmolL-1 concentrations. 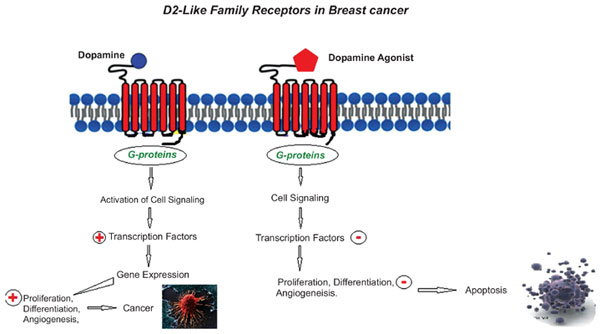