Background: Detailed photochemical and photocytotoxicity studies of two new porphyrins: 5,10,15,20-meso-tetrakis-(4-acetoxy-3-methoxyphenyl) porphyrin (P2.1) and 5-(4-hydroxy-3- methoxyphenyl)-10,15,20-tris-(4-acetoxy-3-methoxyphenyl)porphyrin (P2.2) are reported, as potential candidates for theranostics. For powdered samples of P2.1 and P2.2 adsorbed onto a powdered biocompatible substrate, polyethylene glycol (PEG), a concentration study was performed, correlating the fluorescence emission intensity with sample absorption to determine the useful concentration range for photodynamic therapy of cancer (PDT) in which aggregation does not occur. Cytotoxicity studies were performed in dark and illuminated conditions.

Methods: The laser induced luminescence set-up is home-made, a N2 laser is used as the excitation source and a time gated charged-coupled device (ICCD) as the detector. Fluorescence lifetime determinations were made using pulsed light sources from the excitation LEDs and measures of the fluorescence intensities at different time delays after the excitation pulse. The singlet oxygen formation quantum yields ΦΔ measurements were obtained by comparing the total area of the emission spectra for the reference compound and also for the samples under study in the same solvent and with the same optical density at the excitation wavelength (405 nm). An integrating sphere for relative and absolute measurements was used in this work as an alternative methodology to obtain the values for the fluorescence emission quantum yields (ΦF) of the adsorbed porphyrin under study. The cytotoxicity evaluation was made in the dark and under irradiation, using four different human tumor cell lines and one non-tumor primary cell culture.

Results: In order to establish the useful range of concentrations of the sensitizer for PDT, and due to the use of powdered samples, a special methodology was needed: the variations of the fluorescence lifetimes and fluorescence quantum yields were evaluated as a function of the concentration of the dye, measured by (1-R)*fdye. Both ΦF and τF are constant in the range from 0.002 to about 0.050 μmol g-1, and only after that a concentration quenching effect becomes visible, decreasing both ΦF and τF. This methodology is based in the correlations established between the Remission Function values and ΦF and τF obtained for increasing values of the sensitizer concentrations.

Conclusions: The study of the aggregation effects of P2.1 and P2.2 porphyrins into a PEG matrix allowed us to determine the usable concentration range for photodynamic therapy use, where the aggregation of porphyrins decreases, therefore reducing the PDT action. The use of an integrating sphere for relative and absolute measurements of fluorescence quantum yields and also the lifetime studies as a function of the dye loading confirms the useful range for the use of P2.1 and P2.2 in PEG as powdered samples. The determination of the GI50, the porphyrin concentration which inhibits 50% of the cell growth, evidences that P2.2, the A3B porphyrin overtakes P2.1 (the A4 porphyrin) in terms of PDT efficiency and both porphyrins are much better PDT agents than the unsubstituted porphyrin, TPP. These data clearly show that porphyrins P2.2 and P2.1 exhibit an excellent behaviour in terms of its photocytotoxicity. These results encourage us to pursuit in the study of this family of porphyrins in which a balance of hydrophobic versus hydrophilic substituents in the phenyl group was achieved. 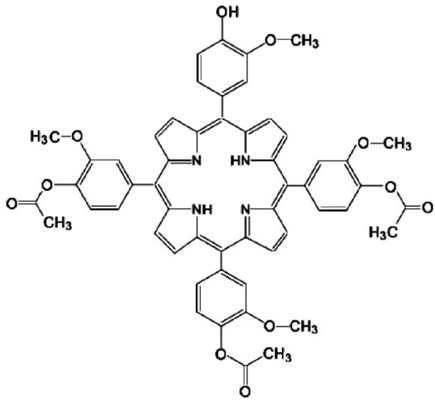