Background: Guanine phosphoribosyltransferase (GPRT) is a very attractive target for the development of new drugs against G. lamblia because of its critical role in the synthesis of DNA and RNA. Herein we report the use of in silico approaches to identify potential G. lamblia GPRT inhibitors.

Methods: Analyses of the binding site of the enzyme accomplished through the use of several methods allowed the construction of a pharmacophore model, which was screened against a database of commercial substances. The resulting retrieved compounds were then screened against GPRT by consensus docking with two different methods, and the top 10% scored compounds had their poses visually inspected. Root Mean Square Deviation (RMSD) values ≤ 2.0 Å were used to define a consensual pose while RMSD values between 2 and 3 Å defined a partial consensus. Main toxicity endpoints were predicted through substructural analyses. Results: From the 1,230 compounds retrieved in the pharmacophore-based screening, eleven had their binding modes consensually ascribed by the docking methods, suggesting a better selectivity for the parasite enzyme in comparison to the human counterpart by avoiding steric bumps with a flexible loop in the human enzyme binding site. One compound, ZINC38139588, was predicted to be totally devoid of toxicity, being perhaps the most promising of this series. Conclusion: Through rigorously validated docking protocols, we predicted the binding mode of these compounds in the GPRT binding site. The use of a consensus docking strategy yielded more reliable predictions of the binding modes to guide the future biological assays. 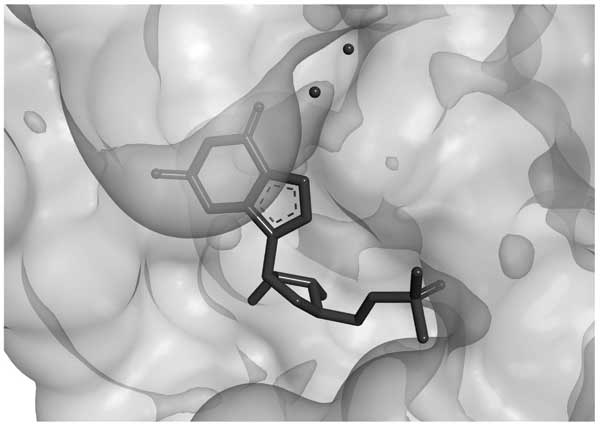