Background: Telomerase, a reverse transcriptase, maintains telomere and chromosomes integrity of dividing cells, while it is inactivated in most somatic cells. In tumor cells, telomerase is highly activated, and works in order to maintain the length of telomeres causing immortality, hence it could be considered as a potential marker to tumorigenesis.A series of 1,3,4-oxadiazole derivatives showed significant broad-spectrum anticancer activity against different cell lines, and demonstrated telomerase inhibition.

Methods: This series of 24 N-benzylidene-2-((5-(pyridine-4-yl)-1,3,4-oxadiazol-2yl)thio)acetohydrazide derivatives as telomerase inhibitors has been considered to carry out QSAR studies. The endpoint to build QSAR models is determined by the IC50 values for telomerase inhibition, i.e., the concentration (μM) of inhibitor that produces 50% inhibition. These values were converted to pIC50 (- log IC50) values. We used the most common and transparent method, where models are described by clearly expressed mathematical equations: Multiple Linear Regression (MLR) by Ordinary Least Squares (OLS).

Results: Validated models with high correlation coefficients were developed. The Multiple Linear Regression (MLR) models, by Ordinary Least Squares (OLS), showed good robustness and predictive capability, according to the Multi-Criteria Decision Making (MCDM = 0.8352), a technique that simultaneously enhances the performances of a certain number of criteria. The descriptors selected for the models, such as electrotopological state (E-state) descriptors, and extended topochemical atom (ETA) descriptors, showed the relevant chemical information contributing to the activity of these compounds.

Conclusion: The results obtained in this study make sure about the identification of potential hits as prospective telomerase inhibitors. 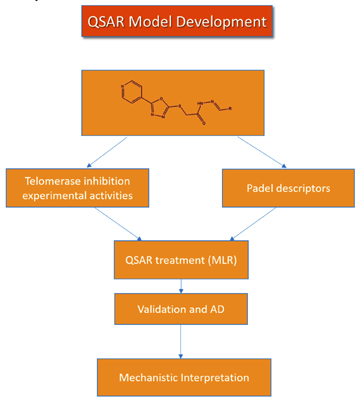