Background: Recent studies have observed overexpression of histone deacetylase 7 (HDAC7) and overactivity of extracellular signal-regulated kinases 1/2 (ERK1/2) in many tumors; therefore, pharmacological interventions to inhibit overexpression of HDAC7 and overactivity of ERK1/2 in cancerous cells holds great promise in cancer treatment. The promising anticancer properties of artemisinin and artemisinin-derivatives (ARTs) have been validated by various experimental reports, including advanced pre-clinical trials.

Objective: Our aim in this in silico study is to identify additional inhibitors of HDAC7, ERK1 and ERK2 as potential anticancer drug agents and provide insight into the molecular level of interactions of such ligands relative to known standards.

Methods: To achieve this aim, the binding affinities of ulixertinib (the standard ERK inhibitor), apicidin (the standard HDAC7 inhibitor) as well as 49 ARTs for HDAC7, ERK1 and ERK2 were evaluated using AutodockVina. The molecular binding interactions of compounds with remarkable binding affinity for all the 3 target proteins, relative to their respective standards, were viewed with Discovery Studio Visualizer, BIOVIA, 2016.

Results: Out of the 49 ARTs, our study identified 2 compounds, artemisinin dimer and artemisinin dimer hemisuccinate, as having higher binding affinities for all the target proteins compared to their respective standard inhibitors.

Conclusion: These findings suggest that artemisinin dimer and artemisinin dimer hemisuccinate could be promising anticancer drug agents, with better therapeutic efficacy than ulixertinib and apicidin for the treatment of cancer via inhibition of HDAC7, ERK1 and ERK2. 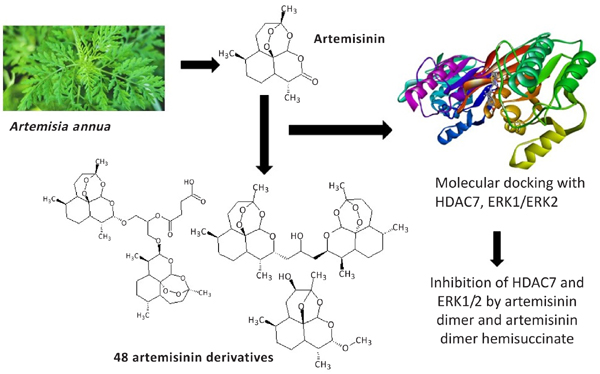