Identification of Inhibitors Based on Molecular Docking: Thyroid Hormone Transmembrane Transporter MCT8 as a Target


Aims: To identify natural inhibitors against MCT8 for Allan-Herndon-Dudley Syndrome.

Background: Monocarboxylate Transporter 8 (MCT8) is a Thyroid Hormone (TH) transporter which is highly expressed in the liver and brain. Mutations in the MCT8 gene (SLC16A2) cause a syndrome of psychomotor retardation in humans, known as Allan–Herndon–Dudley syndrome (AHDS). Currently, no treatment is available for AHDS. Therefore, there is a need to discover new inhibitors of MCT8 for treating AHDS.

Objective: Considering the importance of natural compounds in drug discovery, this study aimed to identify potential natural inhibitors against MCT8.

Methods: As Protein-ligand interactions play a key role in structure based drug design, this study screened 24 natural kinase inhibitors and investigated their binding affinity against MCT8 by using molecular docking. The modelled 3D structure of MCT8 docked with 24 compounds using PyRX through Autodock Vina. Drug-likeness studies were made using Swiss ADME and Lipinski’s rule of five was performed. Triac, desipramine and silychristin were used as the positive controls. Binding energies of the selected compounds were compared with that of positive controls.

Conclusion: This study reveals that these compounds could be promising candidates for further evaluation for AHDS prevention. 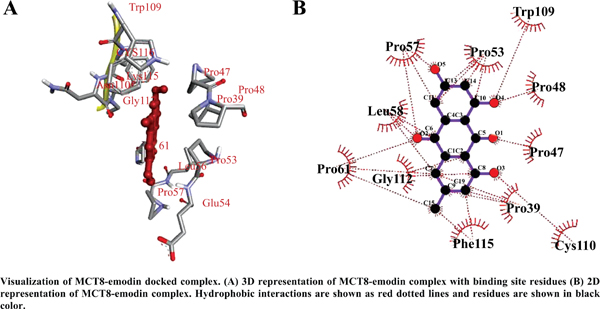