Multiple sclerosis is an idiopathic and autoimmune associated motor neuron disorder that affects myelinated neurons in specific brain regions of young people, especially females. MS is characterized by oligodendrocytes destruction further responsible for demyelination, neuroinflammation, mitochondrial abnormalities, oxidative stress and neurotransmitter deficits associated with motor and cognitive dysfunctions, vertigo and muscle weakness. The limited intervention of pharmacologically active compounds like interferon-β, mitoxantrone, fingolimod and monoclonal antibodies used clinically are majorly associated with adverse drug reactions. Pre-clinically, gliotoxin ethidium bromide mimics the behavioral and neurochemical alterations in multiple sclerosis- like in experimental animals associated with the down-regulation of adenyl cyclase/cAMP/CREB, which is further responsible for a variety of neuropathogenic factors. Despite the considerable investigation of neuroprotection in curing multiple sclerosis, some complications still remain. The available medications only provide symptomatic relief but do not stop the disease progression. In this way, the development of unused beneficial methods tends to be ignored. The limitations of the current steady treatment may be because of their activity at one of the many neurotransmitters included or their failure to up direct signaling flag bearers detailed to have a vital part in neuronal sensitivity, biosynthesis of neurotransmitters and its discharge, development, and separation of the neuron, synaptic versatility and cognitive working. Therefore, the current review strictly focused on the exploration of various clinical and pre-clinical features available for multiple sclerosis to understand the pathogenic mechanisms and to introduce pharmacological interventions associated with the upregulation of intracellular adenyl cyclase/cAMP/CREB activation to ameliorate multiple sclerosis-like features. 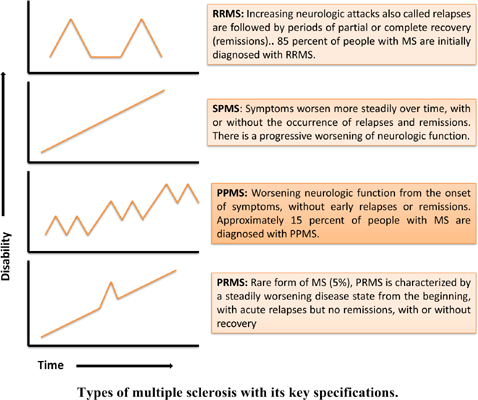